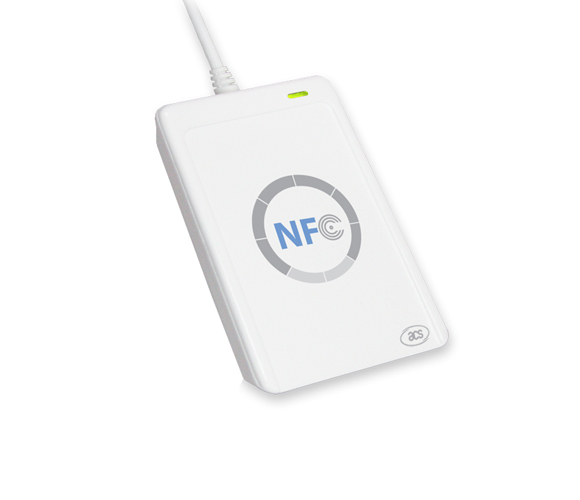 A couple of months ago, I've bought an RFID reader, since I was looking forward to tinker with the new OV-chipkaart (similar to the UK Oyster card). I started reading a lot about the design of the Mifare 4K contactless smart cards, and about the hacks done by Karsten Nohl at CCC in Berlin, as well as the research done on this subject by Radboud University in Nijmegen, the Netherlands.

On this page I've gathered some specs of the ACR122U contactless smart card reader, which can be used to read and write data stored on the OV-chipkaart.

I'll bring the ACR122U along to eth0, so if anyone wishes to tinker with the RFID cards, be my guest. I also wish to encourage anyone to contribute to this article. If I left anything out, or in case of factual errors, feel free to add/correct.

The ACR122 is a PC-linked contactless smart card reader/writer developed on the 13.56MHz Contactless (RFID) Technology and followed the ISO/IEC18092 Standard for Near Field Communication (NFC), supporting not only Mifare ISO 14443 A and B cards but also NFC and FeliCa contactless technologies.

The following operating systems are supported:

Who will bring rfid cards