ALL YOUR GAZEBO ARE BELONG TO US! 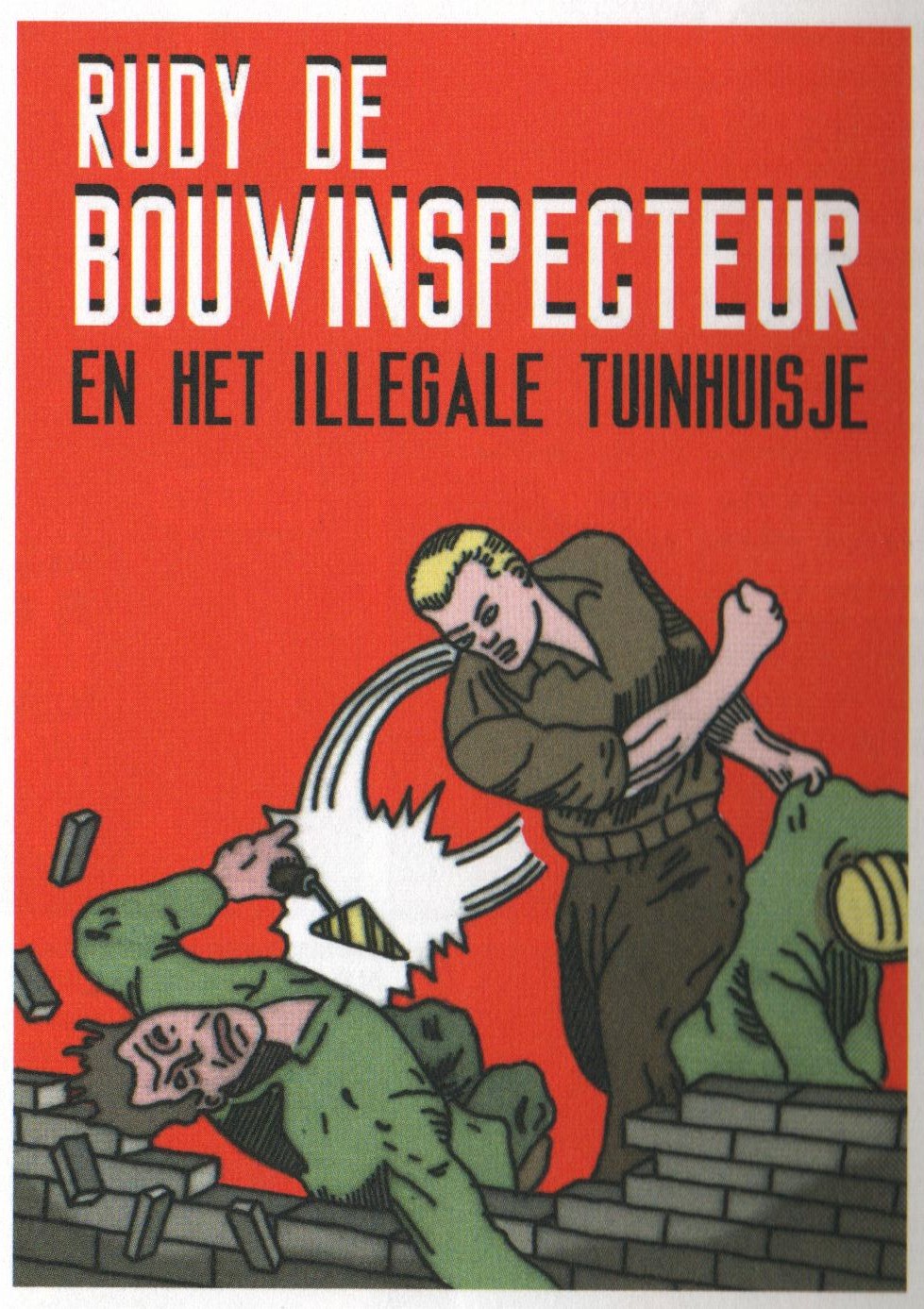 We've got a gazebo! It will be used as a colo on HAR. You can talk to people involved with this in #har-dc on irc.eth-0.nl

Gazebo that will become the colo. It even has a floor, and windows! It is stored in BadBoeli's garage box. It has between 7 and 9 sides, size is about 3-3.5 meters in diameter (we didn't measure, just a guess/assumption).

We will need one or two people who will manage the colo. That means they have the key, can be called for colo-business and will overlook placement of equipment in the colo. Spider maakt een rooster, aanmelden graag ook even bij haar doen.

Since the Thuinhuisje will also house some hardware not belonging to eth0/mononoke, we need some way of contacting (dect-phone who will travel with the manager on duty), registry (who's hardware is it) and publication (HAR-project). Any ideas? And who wants to take care of this stuff?

R3boot We can do this with racktables(.org). This tool has rack/host/customer registration modules and fits the purpose just fine. We will need to create some forms which ppl can fill in and have us do less work.

The On-Duty Engineer can be reached at the 24/4 DECT phone COLO (2656). For this, an account at eventphone.de has been created. Account details are available with Thyrif.

Thyrif has a space DECT phone for use by the On-Duty Engineer. Can be charged at Thyrif's desk in the eth0-tent. Thyrif has also registered the DECT phone number COLO (2656) for this purpose. Thyrif will register his phone on HAR.

We would like to have it finished by the end of the weekend before HAR. Which means building on the 8th, setting up DC-features on the 9th.

Transportation is scheduled for the 7th, somewhere around 11:00, should arive @ har around 14:00 (pickup for blade servers and 1u nodes around that time aswel).

Building / Setting up at HAR

If we want the poles to stick around 30cm to 50cm in the ground, and still keep the possibility of not being allowed to secure them in the ground, plus securing most of the boards of the walls we need poles of between 2m and 2m50. 2m50 should be nice because we can either secure all the board or most of them when secured in the ground. The thickness doesn't really matter, as long as it is thick enough (5cmx5cm should be enough)

The floor is a pressed-wood tangram puzzle that can be secured together with some beams on the bottom-side with nails.

The roof is made up out of eight pizza slices that are made out of two pieces each. These can be secured with bolts in the green set-pieces that can also be attached to the wall's corners. The roof is covered in tar-plates or something, and it has an iron cap to place on top. For extra waterproof-ness we would like to secure another tarp over the entire roof.

The inside will be divided into two parts, cold and hot, separated by the racks. A mobile airco will cool the air in front which will cool the server and end up in the hot side, there we can open a window and let the hot air out. Maybe we can even make the hot-zone in a corner so we have more walk space in the cold-zone. The space around the racks may disrupt our hot/cold-zone principle, so we may have to hang some tarps like curtains to stop the hot-zone air from coming back to the cold-zone. Or, if the insulation on the walls (just some tarps) works well enough, we may be able to keep it cold inside the entire Gazebo and keep all the air inside. 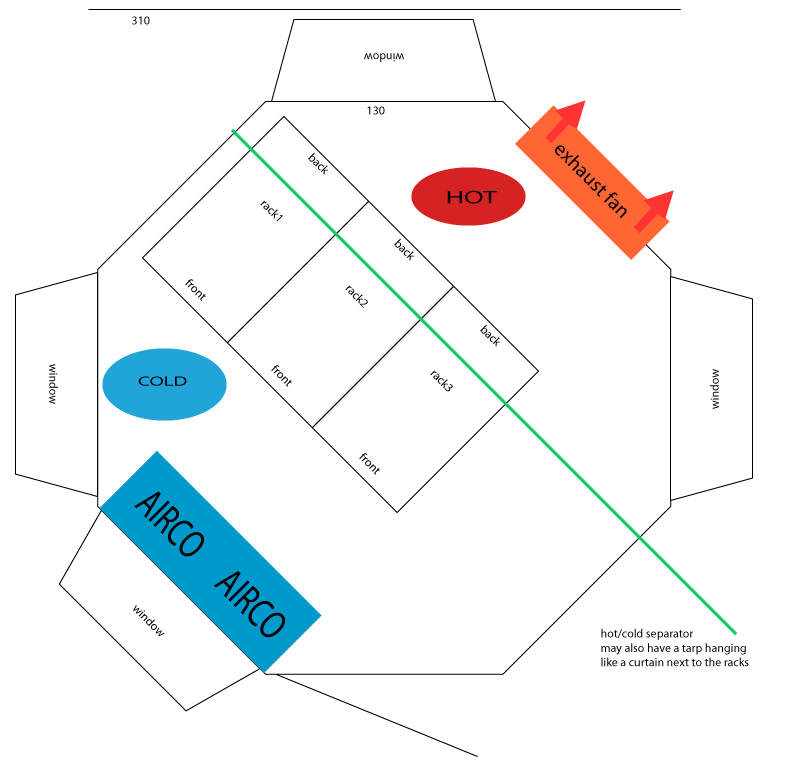 Who can participate in building up the Gazebo at HAR? When will we build it? The building will take about 8 hours with two to four people.

Then the Gazebo needs to be set up for colo use. This includes insolation, cooling, airflow, racks, etc.

Who can participate in setting up the Gazebo for colo use?

In order to set the Gazebo up as a colo, we'll need some stuff to make that happen.

We've been lended a Foundry BigIron 4k, which will have its own 10G uplink. This will be connected something like below: 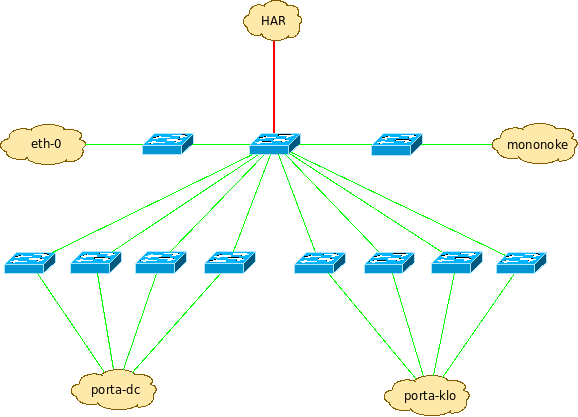 The network will be built up in the same way as all the other datenklo's. We'll have our own /23, which has DHCP and RFC2322 support.

A special rig will be built which will have nagios/zabbix/weathermap/racktables/etc on it, coupled with notification systems (sms / sip / email / irc / whatever is feasible). This will keep an eye out on our infrastructure

Everything that goes into the Gazebo will be registered. Hosts in the Gazebo *need* to have a static ip address, to prevent people from walking in/out too much to hookup monitors and find their ip addresses

We need something that people can use to get a console to their boxen.

What goes in the Gazebo

There will probably fit 2 or three racks in there (if we suspend it high enough, should need only a few cm's) and there might be requests for non-rack hardware. You can ad your hardware here, and there will probably be more people at HAR interested in some rackspace. (wasn't the plan to make it available for other people as well?, sure why not, might make a few bucks to cover the costs)